Nite Guard® predator deterrent works by preying on the primitive fear of being watched, and proves to be an effective tool against unwanted intruders. 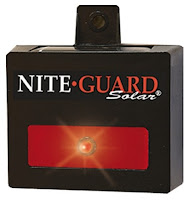 The bright red flash mimics the reflection of a predator’s eye at night. These solar powered and light activated lights begin to flash at dusk. To be most effective one Nite Guard® should be placed in each direction the unwanted animals are coming from. Mounting them to a pole at eye level of the intruders is the best way to guarantee it will be seen. Placed properly they will protect an area of several hundred yards, though the light is not bright enough to be a bother to you or your neighbours.
Nite Guard® is ideal if you have a problem with raccoons, fox, deer, skunk, coyotes, and also, bears. Nite Guard® also works against hawks and owls, you must however mount it approximately 10-14’ on a pole so that it is visible during flight.


Nite Guard and Nite Guard Solar are registered trademarks of Nite Guard, LLC.
Posted by BackyardBirderNGS at 08:06 No comments:

BackyardBirderNGS
The Backyard Birder Nature Gift Shop is a family owned, independent business in Northern Ontario. In 1997, sisters Monique and Danielle started with a small store and as business grew, they expanded to finally settle at 2041 Long Lake Rd in Sudbury's south end. This Shop is not just for the birds, the sister's love for the outdoors and gardening is reflected with the large selection of outdoor decor and garden accessories.